Eddie Berman grew up listening to Tom Petty and Petty’s passing has inspired him to record a cover of “Square One”. The video was released on social media yesterday, but he wanted to share it with you via email in case you missed it. Read what Eddie has to say about Petty and his cover here:

“One of my very favorite childhood memories is when I was 5 or 6 years old, sitting in the front passenger seat, driving around the San Fernando Valley with my dad, listening to his Tom Petty & The Heartbreakers ‘Greatest Hits’ CD. It was the first time I had ever heard Tom Petty – and there was something that felt so incredibly cool about having my dad share these songs that he loved, which I immediately loved as well. Great music has a magical capacity to forge bonds. And every time I listen to “Free Fallin'” I still feel like a little boy sitting in the car next to my dad, so excited for the line about the vampires moving west down Ventura Blvd — just as we’re driving the same direction, on the same street.

I adore all of Tom Petty’s gigantic hits, but for some reason the song “Square One” from his last solo album has hung with me for the last decade or so. After his cruel and untimely passing, I felt compelled to record “Square One”, and I thought I would share it with you all now as a small token of my appreciation for the great man.” 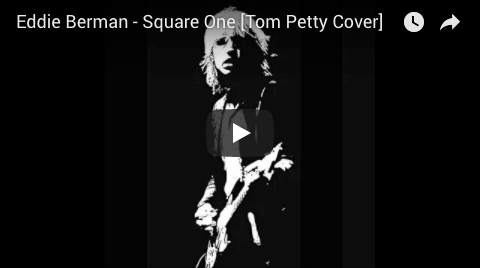 East coast Eddie fans, keep an eye out for some tour dates that will be announced early next week!